Earning a Living with Handicrafts 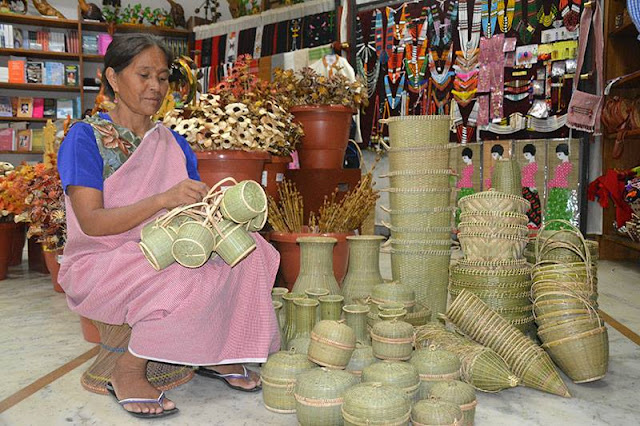 Fifty-year-old Damit Pdakasiej, a mother of 3 girls and 4 boys, from Syntein in Mawsynram makes a living by weaving cane and bamboo handicrafts and marketing them.

Don Bosco Museum, which promotes indigenous art and culture, tourism and alternate livelihood system, is in support of initiatives taken by Self Help Groups (SHGs) and individuals such as Damit Pdakasiej.

Damit Pdakasiej is part of a 20-member ‘Kenbah Kynmynsaw Handicraft and Multi-purpose Co-operative Society’ formed in 2007. Initially, members of the group were trained by government agencies. However since then, they now stand on their own and support their families by manufacturing and marketing their products themselves.

When asked if the trade is sustaining, Damit Pdakasiej said, “In a day, an individual usually makes one big-sized handicraft or two small-sized ones. I earn approx Rs. 200, including the bamboo materials, in a day.” “We are generating an income and managing well,” she added. Her husband Hodling Lapen is also a member of the Society.

Damit Pdakasiej, who first learnt the art of craft-making by watching her mother, also passes on her skills to others by teaching participants attending vocational training programmes organised occasionally by the Society.

Visit our website: http://www.canecraftassam.com/
Posted by Unknown at 03:27 No comments:

Handicraft: The Ancient Tradition of Creating Things with Your Hands 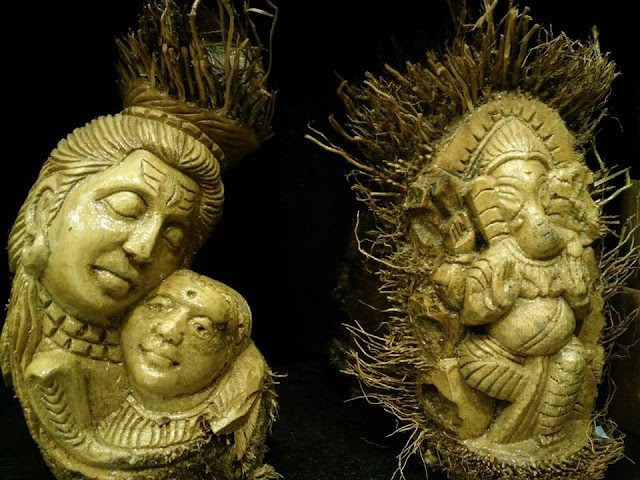 Anyone who’s spent significant time creating with their hands – whether it be painting, carpentry, knitting, carving, building – can appreciate the distinctive satisfaction it evokes. (I’m using the term broadly.) Handicraft, as wide a spectrum as it can encompass, isn’t about routine chores or fix-its. There’s a difference between grudgingly doing your own home repairs to save money and savoring the experience of meticulously renovating your own home. It’s about the love of the craft on some level.

India is one of the important suppliers of handicrafts to the world market.  The Indian handicrafts industry is highly labour intensive cottage based industry and decentralized, being spread all over the country in rural and urban areas.  Numerous artisans are engaged in crafts work on part-time basis.  The industry provides employment to over six million artisans (including those in carpet trade), which include a large number of women and people belonging to the weaker sections of the society.

In addition to the high potential for employment, the sector is economically important from the point of low capital investment, high ratio of value addition, and high potential for export and foreign exchange earnings for the country.  The export earnings from Indian handicrafts industry for the period 1998-99 amounted to US$ 1.2 billion.

Although exports of handicrafts appear to be sizeable, India’s share in world imports is miniscule.  It is a sector that is still not completely explored from the point of view of hidden potential areas.  India, a country with 26 states and 18 languages and more than 1500 dialects offers an enormous range of handicrafts from each of the states.  Major centres in Uttar Pradesh are Moradabad also known as the "Peetalnagari" (City of Brass), Saharanpur for its wooden articles, Ferozabad for Glass. The North Western state of Rajasthan has to offer the famous Jaipuri quilts, Bagru and Sanganer printed textiles and wooden and wrought iron furniture from Jodhpur.  The coastal state of Gujarat comes with embroidered articles from Kutch. Narsapur in Andhra Pradesh is famous for its Lace and Lace goods. But this is only a small part of the total product range. India offers much more.

Ethnic Art of Assam - Terracotta on The Verge of Decay 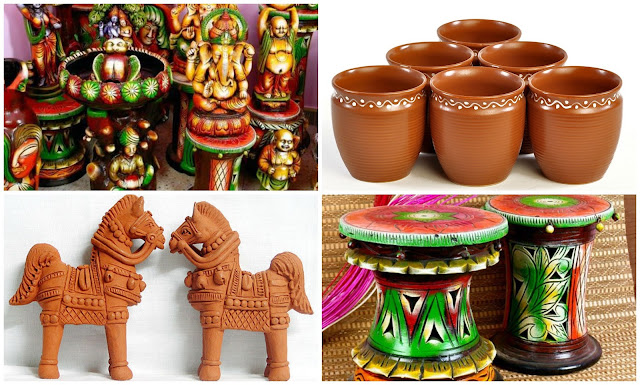 Terracotta Work of Assam is famous in India and also in abroad. It is also one of the most refined versions of  Terracotta Art in India. Assam craftwork represents the rich cultural heritage of India. The magnificent artefacts boost about the mastery skills of the artisans. The terracotta work of Assam has dominated the handicraft segment for ages. The exotic works of art of different mythological figures, idols, decorative showpieces are exquisite example of the thriving terracotta industry of the state.

History of Terracotta Work of Assam

The traditional terracotta work of Assam can be traced back to ancient times. This aesthetic form of art has a deep-rooted origin in this state. It evolved significantly with the evolution of art and culture in Assam. The early artisans mastered the art of creating various forms of religious characters that made its presence in several sacred ceremonies and cultural events. Since time immemorial, this tradition has been handed down from one generation to the other.

Forms of Terracotta Work of Assam

Two different communities, the 'hira' and the 'kumar' functioning in Assam specialise in clay and terracotta craftwork. Both the communities differ in their method of work. The compression method is followed by the "hiras". They focus on preparing household items and womenfolk of the community are mostly engaged in this work. The "kumar", on the other hand pursue the wheel method. They specialise in the art of pottery work. These products are initially made on the wheel that requires experienced hands. Later they are dried and then kept in the ovens or bhattis. Earthen lamps, plates, diyas, clay dolls, incense sticks holders, chains, pitchers and cups are some of the common products prepared by them. The Goalpara district of Assam is popularly known for its terracotta idols. The Kamrup district is recognised for its blooming terracotta industry. Besides this, the Asharikandi village of Dhubri district of Assam is also popular in this ethic art. Almost 80 percent of the families residing in this village are engaged in terracotta work so that the state and central government has announced this place as a 'model village. '

The terracotta craft of Assam has evolved radically with time. It has developed as a hub for crafts and cottage industries. The modern terracotta artisans not only specialise in making traditional images of gods and goddesses but also engage in producing an array of designer items like toys, dolls, vases, pots etc. These incredible craftworks stand as excellent manifestations of the ancient terracotta art of the bygone era. Local tourists as well as foreigners visit the land to have a glimpse of the art form. It has developed from a traditional craftwork to a flourishing industry.

Bamboo and Cane- How one is different from the other 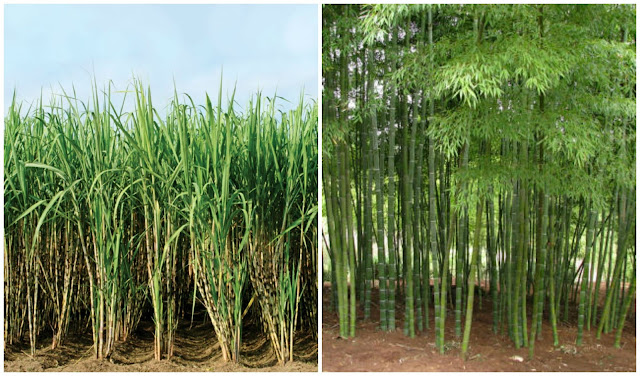 Bamboo and cane are two species of grass that are used in day to day life for a myriad of purposes. At first glance, it may be extremely difficult to tell these two apart. Which is why discerning the difference between bamboo and cane in depth is necessary when it comes to discerning one from the other.

What is usually referred to as cane belongs to the family of Poaceae and can be either of the two genera of perennial grasses with tall, flexible, woody stalks. Cane largely grows in largely riparian stands known as canebrakes and can be found in abundance in Southern and Far Western United States. Cane is also a commonly used name for a climbing or trailing plant in the palm family, primarily of the genus Calamus out of which rattan furniture is produced.

Bamboo can be defined as a tribe of flowering perennial evergreen plants belonging to the subfamilyBambusoideae, tribe Bambuseae of the grass family of Poaceae of which the largest members are the giant bamboos. Known as some of the fastest growing plants in the world, bamboos are very much culturally and economically significant in Asia where it is used as a food source, building material as well as a versatile raw product out of which many products can be manufactured.

Difference between Bamboo and Cane

Both bamboo and cane belong to the grass family of Poaceae because of which their appearance seems quite similar. However, there are several distinct characteristics to both these species that can be used to set them apart.
• Bamboo belongs to the subfamily Bambusoideae, tribe Bambuseae of the grass family of Poaceae. Cane can be either of the two genera of perennial grasses of the family Poaceae.
• In general use, the word cane is also used for rattan a climbing or trailing plant in the palm family, primarily of the genus Calamus.
• Cane is a flexible material that is often used for a myriad of purposes such as the making of walking sticks, crutches as well as for weaving into baskets, boats, etc. bamboo is more brittle than cane and can only be used as flooring and roofing material. Bamboo cannot be weaved.

Japi made of bamboo- The ethnic identity of Assam 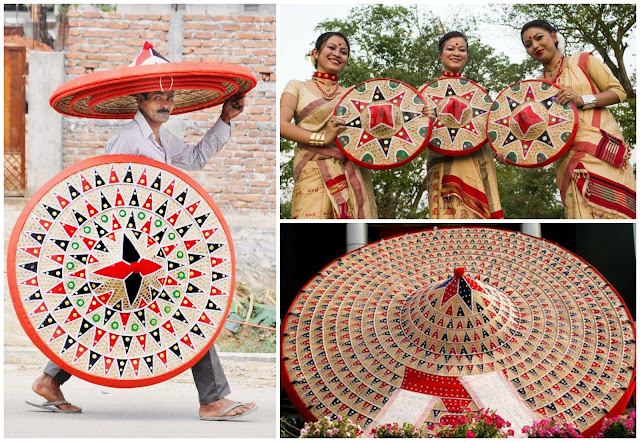 Bamboo and leaf headgear is the most indispensable item of the open air workers. Such ordinary headgears are produced throughout the State. ‘Chhatas’ on commercial basis are largely produced in some villages (e. g. Rangpur, Chinipatan, etc.) of Cachar district and supplied mainly to neighboring tea-gardens and some parts of Nowgong district. The products are generally carried on shoulder loads to the nearby ‘hats’ and sold to consumers in retail or to middlemen in bulk.

Many varieties of ‘Japis’ such as ‘halua japi’, ‘pitha japi’, ‘sorudoiya japi’, ‘bordoiya japi’, ‘cap japi’, etc. are produced in the districts of Kamrup, Nowgong, Darrang, Sibsagar and Lakhimpur. Nalbari and its neighbouring villages (such as Kamarkuchi, Mughkuchi, etc.) of Kamrup district deserve special mention in respect of manufacturing of ‘fulam japis’ (decorated bamboo umbrellas). In olden days, this particular type of ‘japis’ served as headgears for the females of noble and rich families, but now it has become outdated. Productions of ‘fulam japis’ are now only intended to serve as items of drawing-room decorations.

This traditional headgear (japi) is made of strips of bamboo and a special kind of dried palm leaves locally known as ‘tokow-pat’. The manufacture of ordinary ‘japi’ does not require any special skill. First of all, the selected bamboos are split into small strips of required sizes. Then the strips are woven in open hexagonal design into a circular disc with a dome in the centre for the head to fit in, putting a few dried ‘tokow’ leaves (previously cut into required sizes) in between two such discs and finally sewing them securely with yarn and fine strands of cane. Thus, the manufacture of ordinary ‘japi’ is completed.

A japi is more advantageous to the cultivators and other open air workers than the conventional umbrella, because the cultivator after putting it on can tie the strings around his chin leaving his hands free to work in any position-standing, squatting or stooping. ‘Japi’ can also be called a poor man’s umbrella, because of its cheap price.